A Tour of Puddle Walker 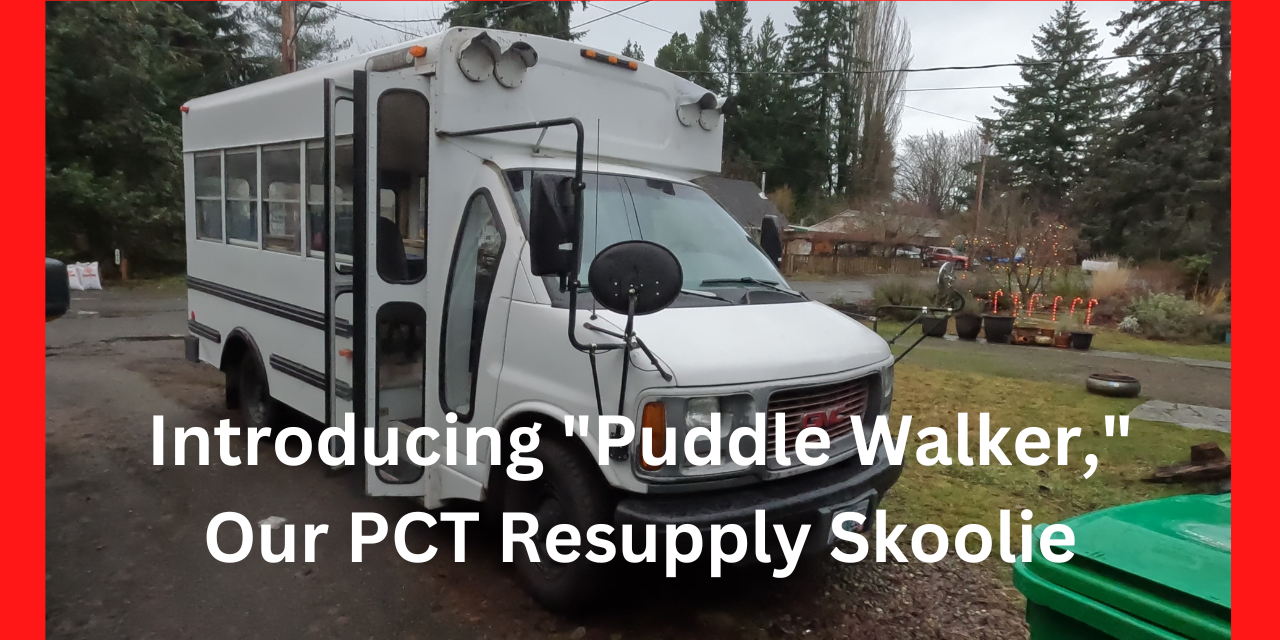 Look what I just bought!

This is a 1999 GMC Savana Shuttle Bus, just-broke in, as my dad liked to say, with only 68,000 miles on her, and she will be my home from February-September as Bev idles away her time hiking 2,650 miles from Mexico to Canada.

Ain’t she a beauty?

Our plans as they stand now

We have actually moved our plans ahead a few weeks.  As it stands now, we plan on driving Puddle Walker down to California, starting early February. We plan on a leisurely drive, visiting as many Trail Towns as possible on the way, creating videos of those towns for other hikers to refer to on their future hikes, videos which will talk about the resupply stores in each town, the other services they provide, etc.

And then, while Bev is actually hiking the Pacific Crest Trail, the dogs and I will hop ahead of her, resupplying her as need be, and serving as a Trail Angel for those other hikers who may need a helping hand.

Why are we leaving earlier than we originally planned? Well, our home sold almost immediately, and we now have a closing date of January 30th, meaning we need to get out, meaning we will have to move into the bus much earlier than we had planned . . . so why not just head out earlier rather than sitting around Olympia just waiting?

A quick summary of what Puddle Walker has in her

My plans for updating and improving her are fluid, depending upon time, and money.  Before we leave, however, the bus will have the following: a bunk bed, a storage/seating area, a stall for the cassette toilet, a kitchen cabinet and sink, and a pedestal with a woodstove.

Interior electricity will be provided by a Jackary 1000 portable power station, powered by 200-watts from two solar panels; it can also be powered through the alternator of the bus when it is running.  This will be more than enough power to maintain our laptops, phones, interior lighting, and coffee-maker.

I will have at least twenty gallons of fresh water onboard, under the sink, and the flow of water through the faucet will be powered by a simple foot pump. I have plans to install an electric water pump, but that will have to wait until we return from the first leg of our journey.

Showering? We will have a solar, portable shower, which can be hung outside on a hook. When that is not sufficient for our cleansing needs, we can stop at Planet Fitness for a shower. Their membership is only $10 per month.

Storage is always a problem when downsizing this much, and we are facing that issue as we speak. Stay tuned for updates on that problem.

And those are the basics as they stand now. I’m sure I’ve left something out, and I’m sure you will have questions, which may remind me of what I’ve forgotten.

I have no answer for this question. The name came to Bev and I while we were walking the dogs. It made us laugh. It seemed perfect. And so it shall be!

Watch the video tour, to be released in a week or two, to see more of Puddle Walker.

If you haven’t subscribed to our YouTube channel yet, please do. You can find us on YouTube under As We Wonder.  And, if you would like to support our efforts to create outstanding content during our travels, you can become a patron on the Patreon website under the same name, As We Wonder.

Thanks to you all!

The American Dream: Been There, Done That, and I’m So Over It
November 22, 2022
5 1 vote
Article Rating
Subscribe
Login
10 Comments
Newest
Oldest Most Voted
Inline Feedbacks
View all comments

Oh Sis, that mouth on you? It’s always gotten you in trouble. I’ll have you know, I checked this morning, and the balls aren’t any larger than normal. 🙂

A-Hem!! “Goin Crazy?” Bro, honey…who you kidding? You been crazy since the day I met you! Otherwise, I’d have kept on going down the road! You know damned-well, I don’t relate to those who claim to be totally sane! What kinda FUN are they??
I don’t even speak the same language they do. Besides, your secret is out! Your fans & followers ALL know you’re crazy! All they gotta do is take a long hard LOOK at what you’re doing!! It’s OK, BabyBro…..I got your back! I tell ’em all, you’re my Baby-Boomer Bro with BIG balls! Hey….don’t blame me…..(Bev told me!!) Bwahahahahah! Love, Your Snot-nose Sis!

Thanks for reaching out, Ann. I appreciate your continued support. Thing are beyond hectic right now. Moving into a tiny space, like a bus, is much easier said than done.

I will probably see Bev every two or three days along the trail. The only exception to that will be a 300-mile stretch of the Sierra Mtns where there is very little road access to the trail. Most hikers have to carry about a week’s supply of food for that stretch.

Okay, back to packing. Thanks again!

Sis, you’re a gem. I’m going crazy, Sis, and it was a very short journey to get there. LOL

Coffee? I’m still wrestling with that issue. Gotta get that one right, you know. A day without coffee is a day not worth living. Am I right or am I right?

Down to one week and counting, Liz. If I don’t go crazy be crazy in the next seven days, all will be well. Thank you for being so loyal.

I am really pleased to hear that your plans aee moving ahead so well. A few weeks ago it would have been hard to imagine that you would reach this stage so quickly. That’s a great name and certainly unique. I look forward to seeing the video and hope you manage to get everything done before February. It’s hard enough downsizing to a smaller place. You have taken it to the extreme and I really sympathize with you.

Hi Bro & Bev! and YOU TOO, Susan!! (Good to see U!)….Another great update, Bill,,,,,I LOVE your bus! If you 2 ain’t the Wandering Wonders, ain’t NOBODY! I’m so excited for you, it’s indescribable! I gave an immediate thumbs-up when you mentioned “coffee-maker” as an essential item. Oh YEAH! You guys are certainly not waiting for any moss to collect under your feet! The Dynamic Duo! Love you both and plan on following like an annoying Toddler! “Where we goin now?? I’m hungry! what’s THAT?? Hey, I gotta PEE!”….Stay safe, keep on trucking (or Bussin?) & God Bless! Sis

How exciting that circumstance has brought forward your adventure! Hope the house sale goes through without a hitch.
‘Puddle Walker’reminds me of what we sometimes call a small car – a puddle jumper! Yours is obviously bigger; it looks sturdy yet cosy.

So not long until your big adventure begins! I’ll be following along with great interest, Bill. 2023 is going to be an amazing new year for you; I hope it’s also a happy, healthy and exciting one.

One question (which you might have already answered) – how often will you be catching up with Bev on her hike?

I can always count on your, Susan! Thank you for your loyalty and friendship.

Sounds exciting Bill and Bev. Will be following along with all your posts and videos.