The Dangers of Thru Hiking

You are here:
Hiking 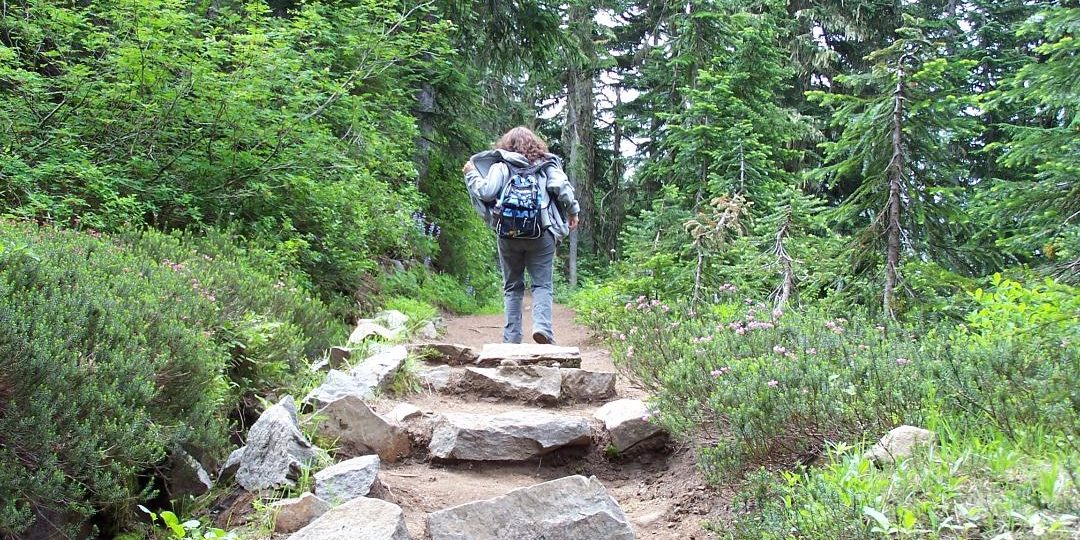 I have mentioned, on several occasions, that my wife will be undertaking the ultimate travel adventure in March, 2023, when she attempts the hiking of The Pacific Crest Trail, 2,650 miles from Mexico to Canada. I have stated that this is a remarkable and magnificent journey she will be on, and I’ve mentioned how proud I am of her for committing to it.

What I haven’t mentioned, however, is how damned dangerous thru-hiking truly is, so I’m going to fill in that little gap in your knowledge right now.

Guessing the weather while hiking

Hiking a continual trail for five months is a crapshoot at best.  The climates are so much different from the desert of Southern California to the Canadian border, and those climates change drastically within five months.

Leave in early March and you avoid the oppressive heat of the desert, but that strategy also puts you smack-dab in the middle of the Sierra region in May, and that means spring snowstorms and raging rivers to cross as the snow melts.

Leave in May and you risk sweltering in the desert, and you also risk running into fall snowstorms and torrential rainstorms in Washington State in September.

The weather is no joke.  Hikers have suffered from heat stroke. Hikers have experienced hypothermia.  Several have died, over the years, to weather-related difficulties, and more than one has walked off, or fallen off, cliffs during white-out conditions.

The scenery is spectacular, but it comes at a cost.  Hikers pass over several mountain passes which tower over ten-thousand feet in elevation, and it is not unusual to suffer from altitude sickness.

Two years ago, a young man, twenty-one years of age, fell from an icy slope, only 200 miles into the hike, and died.  Four years ago a woman was killed when a tree fell on her during a windstorm.  Only about half of those who begin this hike actually finish, and many of those who do not finish fail because of injuries.  A sprained ankle will end a person’s hike, and a sprained ankle is a high-probability when hiking over unbroken or rough trails.  We won’t even talk about broken bones or deep cuts, both of which are a distinct possibility.

Let’s not forget the wildlife while hiking

Rattlesnakes populate the first seven-hundred miles of The Trail, and they are not too keen on sharing shade in their desert.  Cougars will attack and are constant companions for about half of the thru hike, as are black bears.  Food should never be eaten near your tent, and food must be stored in bear cannisters, or hung over the limbs of tall trees, at least 100-feet from the sleeping area.  Bears have a keen sense of smell, and it would not make for a restful night of sleep to have a black bear rummaging through camp in search of a meal.

And, yes, there are scorpions for extra fun.

I know Bev is careful. I know she will take her time and not rush in dangerous situations.  I know she will be in backpacking shape when she attempts this hike.  And I know that she will turn away if faced with a life-threatening scenario.

It’s the unknown I’m worried about.  As one hiker, many years ago, so wisely said, “how do you know what you don’t know?”  Truth be told, one of the reasons I’m not going on this hike with my wife is that, at seventy-three years of age, I no longer trust my body to respond to certain situations, and if I can’t trust my body on a 2,650 mile hike, I shouldn’t even attempt it.

Bev is in better physical shape than I am, but still . . .

All you can do, as a thru-hiker, is be as prepared as possible, and hope for the best.

Misbah, thank you for the lovely note. Reality is greatly overrated, or so I believe. 🙂 I love the dreamers of the world. They do not understand that some things cannot be done. They simply look for a way to do them, consequences be damned. 🙂

Best wishes to you always, my friend, and the love of friendship is coming your way.

Zulma, thank you! I think I would like your oldest daughter. I plan a bit, but in the end, I trust in my ability to adjust to the situation, whatever it might be. As for that book, never say never, me thinks.

Wishing you a brilliantly Happy Thursday!

This sounds like the sort of adventure my oldest daughter would be totally up for. Unfortunately, all the dangers you listed would be brushed aside by her with an ‘I’ll deal with it when it happens’ attitude. Planning ahead is not her forte. lol

I am optimistic that Bev will get through this with flying colours. And you will have a fascinating book in the works detailing her adventures.

Best wishes to you both on this daring escapade.

Hello, Mr. Bill. I hope you are well. Ms. Bev, like me, is daring and courageous. I admire her bravery and spirit. I liked the quote “how do you know what you don’t know?” So wisely said. Thanks for sharing.

I’d like to share with you a quote by Albert Einstein that I’ve always applied in my life.

‘Reality is merely an illusion, albeit a very persistent one.’

I believe this life is nothing more than an Illusion.

Just sharing one more thought: Sometimes this formula of illusion fails, and life gives me a hard kick. But I guess with each kick and wound, I’ve grown stronger. What could be better than that? 🙂

Take care and have a great day.
Best wishes to you and your family.
Blessings always!

Thank you Liz! It should, at the very least, be interesting. 🙂

I really admire Bev’s courage in taking on this challenge. I also admire your support of her. I wish you both well.

It’s just one of those things she needs to do for herself, Linda. Worried? Sure, but I think she will be fine, and she will find some answers along the way.

Oh, I’ll be concerned, Bill, but at some point I just have to turn it over and let it be.

Sounds exciting, fun, and scary all at the same time. I’m glad you can trust her, Bill. I’d be overly concerned the whole time..

Bev is a risk taker, for sure, but she is also very wise. (She married you, ’nuff said). When you and she begin this journey the prayers of countless friends will be with you.

She will be able to contact me for, say, 80% of the hike, and if there is an emergency, she will have her Garmin with her and can send an emergency SOS if necessary….so I think she will be all right. 🙂

It is quite an undertaking and you are right–it is not without its dangers. Do you have a plan for communication along the way? I expect that will help with the worry if that is the right word for it–

Thanks MizB! It will be an interesting year, 2023, and that’s for sure.

Bill, I’m not even going to express my opinion of a happily married, happily retired couple taking this kind of risk. All I can do is pray that she is successful on her hike. Good luck to you both.

There is no doubt it is dangerous, Marlene. Still, the majority of careful, prepared hikers make it just fine, so let’s assume that describes Bev. 🙂 Thanks for the prayers and concern.

I am so scared for Bev. But, I am glad you mentioned that she is a “safety first” kind of person. Still, it won’t hurt to have a few prayers thrown her way during this adventure.